“When you write, you lay out a line of words. The line of words is a miner’s pick, a wood-carver’s gouge, a surgeon’s probe. You wield it, and it digs a path you follow. Soon you find yourself deep in new territory. Is it a dead end, or have you located the real subject? You will know tomorrow, or this time next year.”1 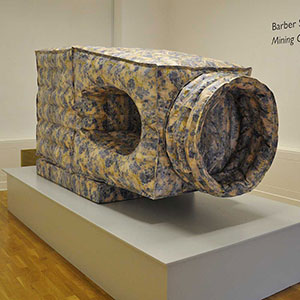 At the Hayward Gallery in 2009 the French artist Annette Messager installed a room of breathing fabric forms. The 2006 work, titled “Inflated-Deflated”, is described as a “wheezing, heaving mass of inflatable body parts and fanciful creatures”. 2  The rhythmic movement of Messager’s fabric organs and limbs offered mesmerising viewing.
Viloma Pranayama requires the yogi to consciously pause the exhalation of breath, creating ‘space’ in the rib cage as the lungs deflate. Breath control is a notoriously difficult exercise: one part mental discipline, one part physical control. Pausing breath is a luxury, a mental challenge tamed by those above ground, living with air to spare.
In 2004 Annette Messager’s installation “Sous Vent (Wind Back)” appeared at the Couvent des Cordeliers in Paris. Within the space of the former convent a low level black fabric canopy was activated by fans. Beneath the billowing fabric surface an illuminated landscape of plastic limbs and masks moved in and out of focus. The cycle ended. Fabric settled, lights below extinguished. And then the air arrived again.

In 1976 an Auxiliary Ventilation Unit was fitted at the Snibston Colliery as part of the national noise abatement regulation. 3   The ‘silent’ fan lives above ground now. In its former life, the fan would have been crucial to the circulation of air underground, an iron lung of sorts. Barber Swindells’ Ventilation Dress takes on the form of this equipment. Air pumped into the sculpture gently seeps from seams in a cycle of inflation and deflation that makes the form feel quietly alive.

Outside, on a bitter winter day, the Auxiliary Ventilation Unit lies frozen in time on the museum grounds. It is one of a number of oversized shapes, extracted from below the earth in an effort to give us a sense of the scale of machinery that existed beneath our feet as part of the complex network of tunnels and tools that made up the mine. Above ground, the equipment dwarfs the body. But it exists in paralysis now – the motion and noise of previous decades of production difficult to imagine.

Inside, my breath warms again. The rusted metal fan is replaced with a floral print pattern: innocent, light. This material is a counterpoint to the darkness of the mine’s underground-scape. 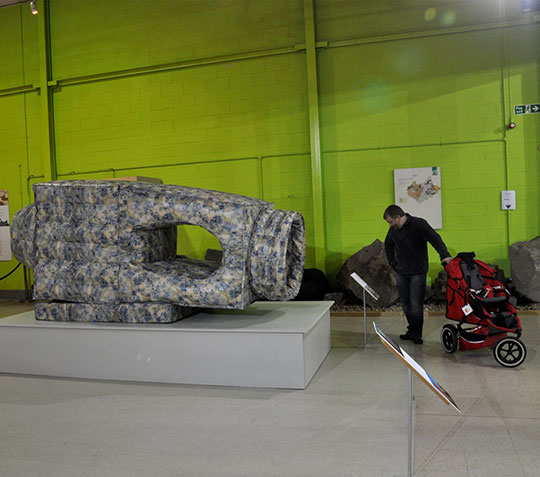 The pattern is far from accidental, first appearing on a summer dress worn by the 1972 National Coal Queen, Margaret Dominiak, at the 1976 Coal Queen Reunion. In Barber Swindells’ version the original floral repeat is disrupted, comprised of snap shots from the pattern, noticeable in the sharp lines of the photographs edges. It is a new type of scrapbook now: a photo album reshuffled.
The dress once bore witness to another side of mining: a community bound together by a distinct, shared identity. The lightness of this pattern – the clear sense of celebration –  represents the antithesis of work clothes. D.H. Lawrence, for instance, writes of his childhood memory of “great rolls of coarse flannel and pit-cloth which stood in the corner of my grandfather's shop when I was a small boy, and the big, strange old sewing-machine, like nothing else on earth, which sewed the massive pit-trousers.” 4

Can we compare a seam of coal to the seams of cloth? I imagine coal seams must have a grain and cut like a cloth; ways coal will bend and chip and go and ways it won’t. Perhaps anything natural has that sort of history to it, how it is laid down. In the expanded field of craft, many would argue that a computer programmer is the craftsperson of the current generation. 5   But there is also something to be said for the operators of mechanical tools – the interfaces – who accumulate their own forms of tacit knowledge. Craft does not have to be rose-tinted-knitting-needles-by-the-fire….

Ventilation Dress suggests a domestic shape. It belongs to the home: a place of rest and recovery from the miner’s labours underground. The close communities of the collieries have long vanished from the social fabric of modern lives. But amidst the predominantly negative stories we associate with a life of mining, this is a narrative largely overlooked: a sense of place and purpose, solidarity born by a community of shared risk and labour.
I can’t see where I should rest myself within the Ventilation Dress. I can see the beginning of a seat, the fold of an arm, but the form then changes and my entry point is illusive. Perhaps this is only fair. This is not my experience to share, but a history to learn.

A journal about craft and creativity
Inhale/Exhale
Jessica Hemmings