Joseph MCBrinn
Dublin City and Hugh Lane Gallery of Modern Art, Dublin, Ireland February 26– August 30, 2009
In the words of Homi Bhabha the chief effect of colonial power is ‘the production of hybridization’ or in the words of Patrick Brantlinger ‘imperialisms – indeed, all master/slave relations – are always two-way streets.’  Few artists have demonstrated this as colourfully as the British-born, Nigerian-raised, artist Yinka Shonibare.  His striking use of batik, a wax printed cotton fabric originally produced in Indonesia for the Dutch and British export markets and now consumed in contemporary West Africa, to cloth his headless figurative sculptural tableaux has been delighting audiences in Europe and North America since the 1990s. Deploying what Anne Hollander has termed the ‘symbiotic relation’ between fashion and art history and feminist art’s exploitation of cloth and ‘clothing as subject’ the batik fabric has become, intentionally or not, Shonibare’s leitmotif.  In 2009, as a major mid-career retrospective of his work travelled from the Museum of Contemporary Art in Sydney, Australia, to the Brooklyn Museum in New York and to the National Museum of African Art at the Smithsonian Institution in Washington D.C., the textile historian and critic Jessica Hemmings cautioned that there was a ‘danger of his brightly patterned cloth beginning to feel like a one-liner.’

Earlier and more pointedly, in 2005, the American art historian Sylvester Okwunodu Ogbechie argued that Shonibare’s commissioned installation for Documenta 11 in Kassel, in 2002, was undermined in its efficacy as he had ‘exchanged a sophisticated critique of Victorian claims of racial purity for a melodramatic focus on explicit scenes of Victorian debauchery.’  Cautious of critique and not wanting to initiate an egg fight, critics such as Ogbechie and Hemmings have also placed particular stress on the serious intellectual rigour underpinning Shonibare’s continued use of batik to create something that is as yet, most would agree, far from redundant.  Indeed, without question since 2000 a spate of solo shows have demonstrated Shonibare’s continued inventiveness and prodigiousness.  From the 2002 self-titled show at The Studio Museum in Harlem, New York to the 2004 Double Dutch show at the Museum Boijmans Van Beuningen in Rotterdam to Flower Time at London’s Stephen Friedman Gallery in 2006 and Jardin d’amour at the Musée de quai Branly in Paris in 2007 culminating in his recent Antipodean-American retrospective.  However, one show that elegantly showcased Shonibare’s remarkable creative abilities was a small exhibition commissioned for the Dublin City and Hugh Lane Gallery of Modern Art in 2009, entitled Egg Fight (based on Jonathan Swift’s satirical travelogue Gulliver’s Travels), that is the focus of this review.  Indeed, as his globetrotting retrospective opened in Sydney, Shonibare revealed: ‘At present I am re-reading Jonathan Swift’s Gulliver’s Travels (1726), which interests me on a number of levels.  I am particularly interested in the question of Gulliver’s empathy with the different cultures he encounters.  He sees that they are different and they see he is different … Gulliver’s voyages also see him becoming involved in internal power struggles in the lands he visits but he himself is also, at various stages, both powerful and powerless depending on the context.  Which brings us back to the question of power and its contexts and how we assume and in some cases are beholden to power’ (Kent, 2008: 45). 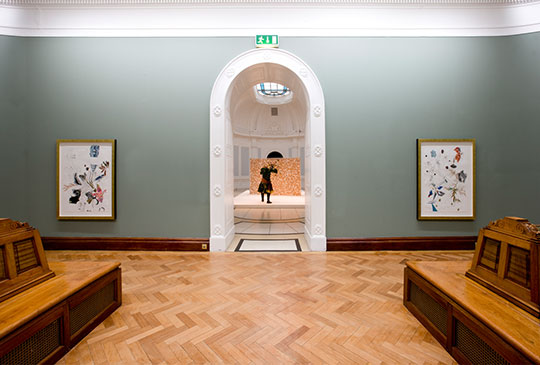 Ireland as a space of unresolved post-colonial hybridity, within Europe, seems an ideal location for Shonibare’s work.  In 2001, the Irish public got their first opportunity to see his work when he showed Diary of a Victorian Dandy (1998) in the Vantage Point group exhibition at the Irish Museum of Modern Art in Dublin.  The show aimed to bring together contemporary art ‘informed by everyday life, addressing current issues such as ecology, technology, popular culture and globalisation.’  Although, criticised for ‘not having an angle on anything’, the title itself doing ‘little more than paper over the tenuous links between the artists’, nevertheless Shonibare’s work was seen as having more than ‘raw novelty value.’  Fast forward a decade and the Egg Fight installation at Dublin’s Hugh Lane demonstrates that Shonibare’s sensitive, if satirical, use of batik as a potent metaphor in visualising the ‘horrors of colonialism’ has established him as one of the world’s leading artists and commentators on the ethnic/aesthetic dimensions of globalisation (Guldemond, 2004: 20).  As the best of his work does Egg Fight continues the deconstruction of the tropes and iconoclasm of Europe’s long eighteenth century and its foundations not in Enlightenment but in militarist imperialist expansionism, and in this Jonathan Swift’s text proved in every way a perfect foil for Shonibare.  The installation, although not directly illustrative, contained two (headless) figures (one Lilliputian and one Bledfuscudian) shooting at each other through a wall of eggs.  This visualised the war between the empires of Lilliput and Blefuscu, in the first section of Swift’s book, who bickered bitterly because in Lilliput they broke the small end of the egg first and in Blefuscu they broke the big end first which was Swift’s satire on the ‘battle for supremacy between Catholics and Protestants in eighteenth century Europe.’ The imposing Georgian town-house that now houses Dublin’s Hugh Lane Gallery was an appropriate setting for Shonibare’s show as it was built in the eighteenth century by Lord Charlemont, who like Jonathan Swift was a member of the Protestant Anglo-Irish élite who opposed English protectionist policies that left Ireland’s textile industry in ruins.  As well as his installation, Shonibare also showed a selection of his recent Climate Shit Drawings, a series of collages that meditate on the most pressing preoccupation of the present phase of globalisation – climate change.  The imagery depicts the visual vocabulary of the global economy including images of flowers, aeroplanes and scraps of newspapers. 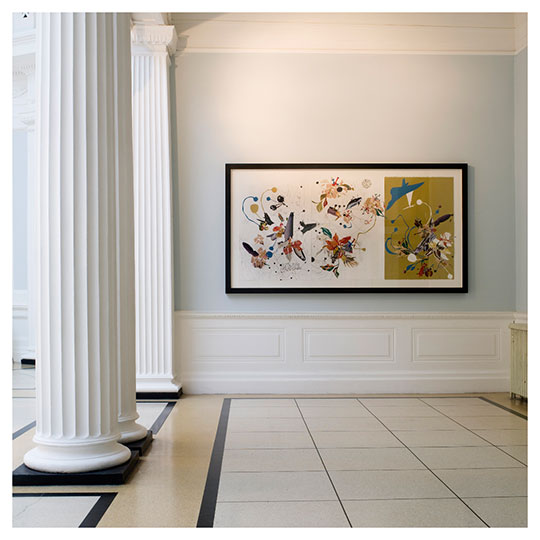 One of the most visual episodes in Swift’s Gulliver’s Travels, certainly for younger readers, is the scene describing the Lilliputians, ‘Two hundred Sempstresses’ and ‘Three hundred Taylors’, making Gulliver’s gargantuan clothes (Swift, 1994 [1726]: 51).  It prompted me to question how the clothes on Shonibare’s mannequins are actually sewn?  Are they out-sourced, as so much fashion manufacture is in the West (to the Third World), or is the artist involved in their facture like the many contemporary male artists for whom sewing is a central and subversive practice?  The garments themselves are generally very historically accurate and technically accomplished and Shonibare has openly acknowledged his mannequins’ affinities with ‘dressmakers’ dummies’ (Hynes, 2004: 398).  However, with so much critical focus on the text/textile complexity of Shonibare’s work, it would be interesting to know more about his ideas on sewing (does he favour hand or machine?) as it would strengthen the many strategies and approaches he deploys in his complex, and playful, deconstruction of cultural assumptions about gender, sexuality, class and race and about the history, and reality, of globalisation. Egg Fight was a thought-provoking and visually stimulating show and perfect in scale and setting.  Shonibare’s visualisation, like Swift’s writings, in the words of Sarat Maharaj ‘tend to leave us less sure about imagining power as a dominating force radiating outwards from a focal, colonizing source.  We are alerted to the possibility of it being something like a two way, creative/destructive process – even when ‘the one’ seems to be calling all the shots’ (Maharaj, 1991: 89).